Methana is a peninsula of volcanic origin, and you can still visit one of the volcanoes that created it. The volcanic landscape is also the source of the smell you sometimes notice here - sulphur - which still seeps out from the hot springs. But you get used to it after a short time. There are 32 volcanic centres here, but the last eruption was in the year 230 BC near the village of Chora Kaimeni. In addition, there are thus hot springs and healing spas in several places on the coast, nice and green scenery, beautiful beaches and pleasant small villages.

Methana has been inhabited since the Mycenaean era, and the peninsula has been central throughout history. The capital of Methana and the small villages around are excellent destinations when you want peace and tranquillity in the Greek manner. The village of Chora Kaimeni is closest to the volcano crater, while heading to Agios Nikolaos, for example, you can experience the hot springs. You can swim in these hot springs throughout the year, and it is supposed to help both rheumatism, skin diseases and neurological disorders. The Greeks have visited these springs since the ancient times.

Historically, Methana always belonged to the county Attica (Athens), and still does, but look at a map and you’ll see that the peninsula is clearly a part of Argolis. Shortly after you have driven across the thin strip of land connecting Methana with the mainland, you can turn left and look at a remnant of a defence wall built during the Peloponnesian War, in 425 BC, as well as a 1,700-century fort with four corner towers called Favieres / Fabiero.

Continuing on the main road, you'll soon be in the capital that is also called Methana. There you can stroll out on to the small Nisaki, a micro peninsula with remains of Cyclopean walls, a beach and the church Agii Anargiri. Or you can walk to the beach promenade, sit on one of the cafés or taverns, and just enjoy life.

Until quite recently it was impossible to drive all around Methana, you had to choose the east or west side, but now the road runs all the way around.

If you drive west from the capital, passing the first village Dritseika, just above lies a plain, Throni, with the ruins of an old fort. Furthermore, we come to the quaint village of Vathi. Vathi means deep, the sea here is 400 m deep, and is said to be the place in Greece where the sharks go to breed - fortunately they will not show up at the beaches, according to our guidebook. Close to Vathy we can visit Paliokastro (Old Castle), an ancient acropolis where only the gate and some walls are left - the rest disappeared into the sea during a volcanic eruption. Archaeological excavations here shows that people have lived in the area since 5000 BC, and in the sea below are still the remains of a sunken city. Near Vathy is also the small Ag Nikolaos Church; it is among the oldest on Methana. Vathy has a lovely harbour with several fish taverns, and a volcanic beach.

The road leads on to Kaimeni Chora (the burned city), a nice little village where you can clearly see the lava from the last eruption. Here are two fine chapels, Ag. Sotirios and Ag Ioannis. If you drive a few minutes further out of town, you'll soon reach the narrow path that after about 20 minutes brings you up to the volcano rim. Wear comfortable shoes – it’s well worth the trip! The volcano is called Malia Vgethi, an Albanian name. The volcano mountain is 680 meters high, the second highest on the peninsula. The highest is Helona with its 740 m

West of Methana offers more nice villages, like Agios Nikolaos, also called Pausanias Spring by the locals, for he described the hot springs here in about 230 BC. As we approach the capital again, we drive past (or stop!), at the Byzantine Church of Konstantinos and Eleni, where some remains of a Mycenaean settlement have been found. There are a plethora of small churches on Methana, like it is everywhere in Greece for that matter. 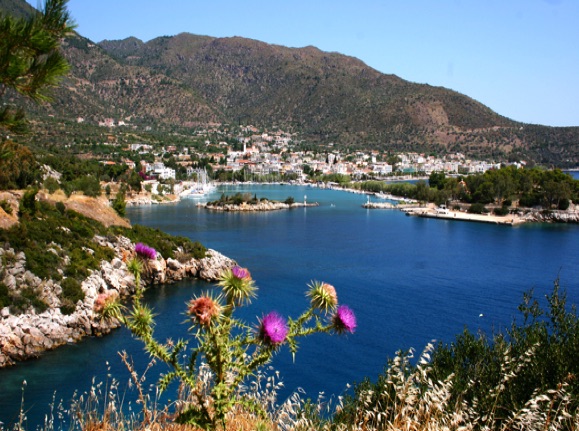 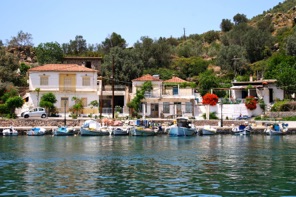 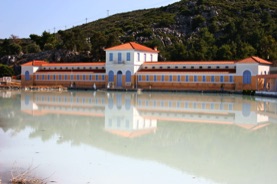 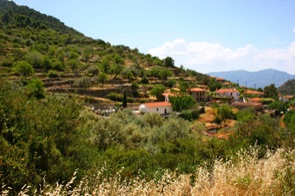 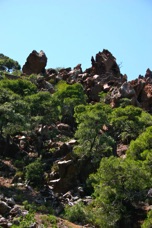 and a nearby bath (below).