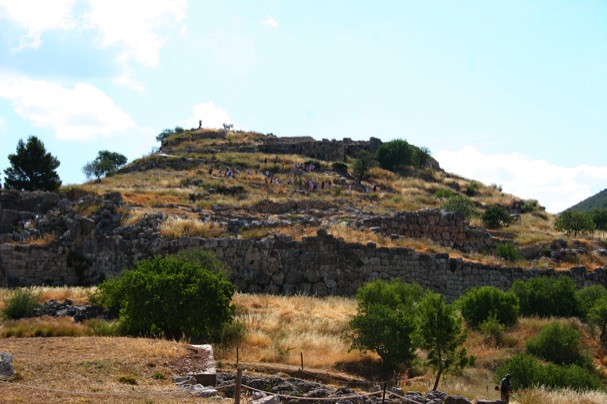 The old Greece is best known for the ancient period, the glory days when for instance the Acropolis in Athens was built, but there have been highly advanced cultures in Greece long before that. The Mycenaean civilization, which lasted from about 1600 to 1100 BC, was so strongly represented in Argolis that this was Greece's heart at the time. Skilled warriors defeated the even earlier Minoan civilization, and a rich aristocracy built palaces and temples. Mykines was the main city in this era, which also explains the name of the era. A short half hour’s drive north of Nafplio, you can still watch the impressive remains of this great, once mighty, city.

Your first stop is the great Lion Gate, dating to the Greek Bronze Age and specifically the 13th century before our time. Note the huge rocks in and around the gate. Many weigh 20 tons, and there are building blocks in Mykines weighing up to 100 tons. Men and oxen were the "engines" they had at the time, but the walls are called "Cyclopean", which says that they were once thought to be built by the Cyclopes, one-eyed giants who are frequent guests in Greek mythology.

Inside the city you can read descriptive texts that are located at the major sights. Feel free to also use the free leaflet you can pick up when buing your tickets, or bring a guidebook. Only the foundations remain from the tombs, palaces, shops and homes that once were here. The outer wall is more than 1.1 kilometres long, and you can see from the drawing (above, right) that many buildings were once part of this amazing city.

And cast more than a glance at all the great views. Mykines is located between two mountains, yet there are plenty of places you just have to stop and enjoy the scenery below and above. After passing the Lion Gate you soon find yourself at a spot where the paths split. Select the left one, to get a, in all aspects, a better walk!

Museum of Mykines is also a wonderful place, where you can look at the slightly ridiculous objects like the lady with the "platform shoes", but mostly richly decorated pottery, jewelry, toys, etc. The museum gives a good insight into the Mycenaean culture, especially if you also take the time to read the many posters that explains about this. And by all means look at the model of Mykines in the museum lobby.

Equally at Mykines is Atreus' treasury, also known as Agamemnon's tomb. It has the shape of a beehive, called tholos in Greek. There are nine similar near Mycenae (see below), and five more in Argolis, but this is the most impressive of them all. King Atreus was, according to mythology, the son of Pelops (who has given Peloponnese its name), and father of Agamemnon and Menelaus, known from Homer and other ancient writers. But both Atreus and Agamemnon lived later than the time the tholos was built, one has later discovered. Oh well. It is an amazing building anyway!

The tholos dates from about 1250 BCE, it is over 13 meters high and over 14 meters wide, and it was for a thousand years the tallest and widest dome in the world. Not only that, look at the craftsmanship here, how precise the stones are hewn and laid, both in the "beehive" and the road that leads into it. It is downright amazing!

Many skip the tholos when they visit Mykines - perhaps because it’s a hundred metres or so of walking to get there - but they should not. The burial chamber is in many ways more impressive than the city itself, because it is so incredibly well preserved.

Tickets to Mykines, the museum and Atreus tomb are sold as one, for 12 Euros (2016), and you can without problem spend a whole day here - if you're interested in this kind of stuff, of course. Remember to wear good shoes, there are quite a few feet that have trampled on the roads of Mykines, and the stones can be very slippery.

There is a small kiosk with refreshments in the parking lot, but for a full meal the nearest place is the small village close by who also called Mykines. For something completely different, go to Silo.

A beehive, rich kings and a lady with platform shoes

Mykines is also called Mykene, Mycenae and the like, and is situated 20 km from Nafplio. Bus route here.

These graves are not mentioned in the guidebooks, so we’re proud to do it here: In the valley below the Atreus tomb are several more Mycenaean tombs, including the very well preserved beehive tomb colloquially called The Demons’ Grave (left). The reason is that when the tomb was explored in 1918, demon masks were found buried here. There are also numerous smaller graves, as the one pictured right. The graves are located in a beautiful olive grove, and are not signposted. 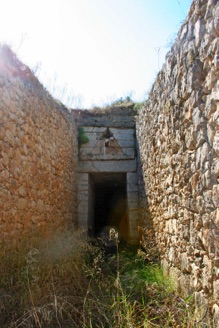 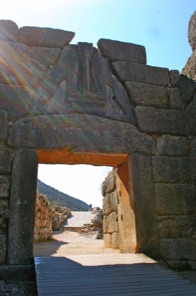 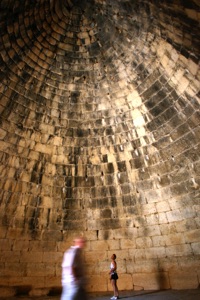 The lady with the "platform shoes".

The very first organized Greek society belonged to the Mycenaeans, whose kingdoms exploded out of nowhere on the Greek mainland around 1600 B.C. Although they disappeared equally dramatically a few hundred years later, giving way to several centuries known as the Greek Dark Ages, before the rise of “classical” Greece, the Mycenaeans sowed the seeds of our common traditions, including art and architecture, language, philosophy and literature, even democracy and religion.

This was a crucial time in the development of what would become Western civilization.

And this has been the scholarly consensus ever since: The Mycenaeans, now thought to have sacked Knossos at around the time they built their mainland palaces and established their language and administrative system on Crete, were the true ancestors of Europe.

The Mycenaeans were the true ancestors of Europe