Morea was the name of the Peloponnese in the Middle Ages, and one of the best preserved medieval towns is Mystras, which in those days was called “the wonder of Morea”. And Mystras still is wonderful, well preserved and beautifully resting in a mountainside.

The Franks built the castle at the top in 1249, but already 13 years later the town was a part of the Byzantine Empire and the capital of Morea. For a time the city was considered the second most important in the realm of Constantinople (Istanbul).

As for the rest of the Peloponnese, both the Venetians and the Turks had control of Mystras, until it finally became Greek in 1821. When modern Sparta (see below) was founded by King Otto in 1834, the town soon was left deserted.

And Mystras is still deserted, in the sense that no one lives here, with the exception of some nuns, who among other things, run a shop here.

Mystras is really impressive and as stated very well preserved. A walk through its gates and streets, between the forts, churches and monasteries, houses and palaces, is a trip through history.

Sparta, 6 km east of Mystras is considerably more fascinating in the historical sense than the town facing us today. In ancient times this was a powerful city-state, known for its strict social system that was almost exclusively focused on creating daring and skilled warriors. However, also the women of Sparta had considerably more power than their peers in other city-states.

However, there are few physical remnants of the city's heydays, even if Sparta is a nice enough place to visit. While houses in most modern Greek cities are built almost on top of each other, there is plenty of room in Sparta: King Otto planned a Sparta that would give home to 100,000 people, but even today only about 20.000 live here. Worth seeing in particular are the Archaeological Museum, the Acropolis and the Olive Museum. 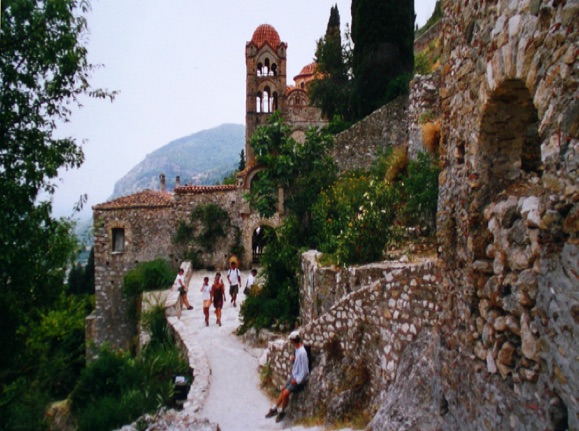 The wonder of Morea, and Sparta

of Nafplio. Take the motorway via

Tripoli, or the scenic route via Leonidio (168 km).

The monastery of Pantanassa in Mystras. 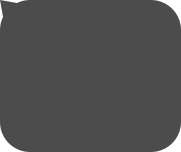 This is a supremely poetic place where you can spend an entire afternoon wandering around without seeing more than a dozen other people. 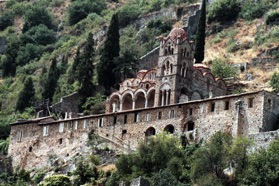