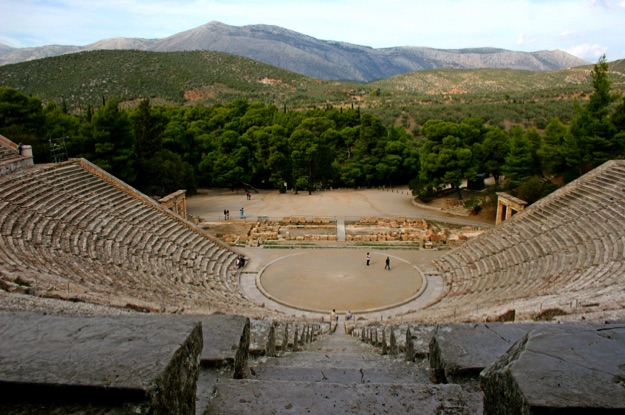 The god Apollo had a son, Asclepius, who was raised by a centaur, a creature who is part man, part horse. The centaur had immense knowledge of medicine and healing herbs, and Asclepius grew up to be a highly skilled physician. His daughter, Hygeia, worked with him. She was the goddess of health, and her name is the source of the word hygiene. Asclepius was born in Epidavros - where the myth ends and we move into reality.

Based on the stories of Asclepius, it was natural for the ancient Greeks to build a health centre in his birthplace. This soon became the best health centre in antiquity, and wealthy citizens went there for both diagnosis and curing. The first night they had to spend in a particular hall, and the dreams they had that night would help in the hunt for the correct diagnosis. The centre, begun in the sixth century BC, was actually in operation until the 5th century a.d., but eventually it was not Asclepius one requested healing from, but the Christian god.

The area is large, the archaeologists have done a comprehensive job, and a visit here can put your mind back to the horrors of many illnesses in the past - especially if you visit the small but good museum first, and take a look at the surgical instruments they used in ancient times.

The health centre and the city of Epidavros, which then was in the same place, attracted so many people that in the 4 century BC a theatre was erected. This theatre could accommodate 15,000 people; spread over 55 rows - counting the last 21 rows added by the Romans. The acoustics are so perfect that you can hear people whispering on stage even if you are on the back row!

The theatre is still in use, primarily showing ancient Greek comedies and tragedies, like Antigone, Oedipus, Oresteia, and Lysistrata. The performances are given in July and August each year, and it is an indescribable feeling to sit on the ancient pews and experience the same as people did over 2,000 years ago. It’s even ok if you don’t understand Greek, it is possible to read a little about the actual play in advance, for instance online, and get good results anyway. Lately, many of the plays comes with "subtitles" an a screen above the scene. The black velvet Greek night and the atmosphere in general help, of course, to the enjoyment and beauty. Sometimes even English-speaking theatre companies come to perform here.

Tickets should be booked in advance, for example on greekfestival.gr

KTEL tends to set up a bus service between Nafplio and Epidavros on the evenings of performance, but just to be sure, you should check it out beforehand.

Asclepius' centre for health, and his theatre

From Nafplio it is easy to reach probably the most beautiful site of them all, Epidaurus.

Asclepius in the Epidavros Museum, easily recognizeable with his serpent entwined staff. (above) and Helen Mirren as Phedre, Epidavros 2009 (below). 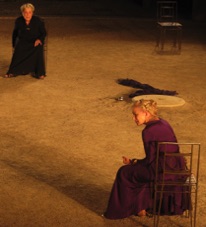 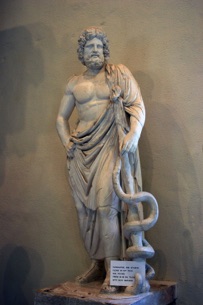