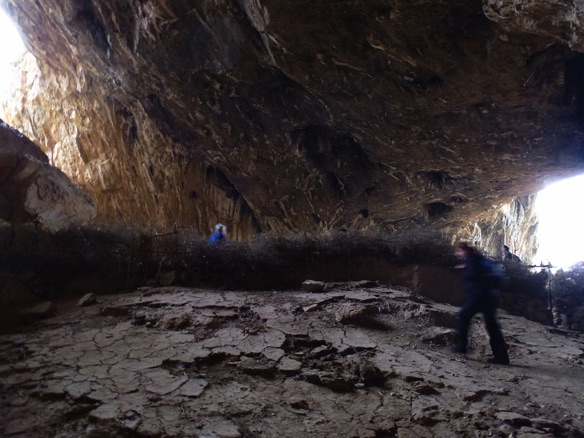 Franchthi or Frachthi cave is probably the oldest known residence in Europe, because people may have lived here 40,000 years ago or even before that! It is at least a certainty that people lived in the cave 20,000 years ago. The problem is that large parts of the cave have collapsed, and archaeologists have only explored the outer parts. An at least 25.000 years old skeleton were found here - the oldest ever discovered in Greece - an approximately 25-year-old man who probably died of malaria. (A disease that doesn’t exist in Greece anymore.) Wikipedia tells us that the cave is one of the very few settlements in the world that shows nearly continuous human occupation for such an extended period of time, and is one of the most thoroughly studied sites from the stone age in southeastern Europe.

The cave is suprisingly large, but it used to be even larger. Archaeologists find layer upon layer of residuals of lived life the deeper they dig. Hunters, fishermen and farmers have lived here. The cave was abandoned around year 3000 before our time, and most of the findings are at display at Nafplio Archaeological Museum.

Sometimes boat-trips will be arranged to bring people over the strait from Kilada (see below) to Frachthi, but feel free to ask a fisherman to take you, Kilada is full of them. You can also, of course, choose to walk, it only takes about 15 minutes from where the road stops, and it’s a pleasant walk, along a beach and then a path, following the shoreline. The island you see from the path, Koronida, is privately owned. 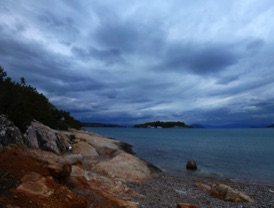 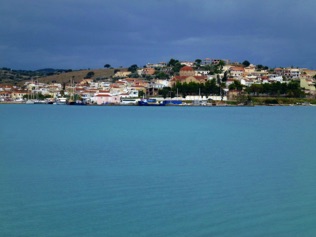 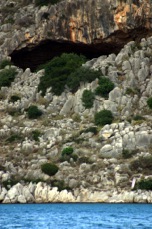 From the path leading to the cave.

As mentioned above, the Frachthi cave is located just across a narrow strait from the small, pure Greek, coastal village Kilada (Koilada). This little town is unaffected by tourism, living of fishing and boat building, and certainly the place where you should treat yourself to a meal of freshly caught fish.

Frachthi seen from the sea. 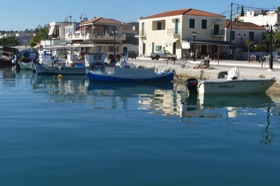