Ancient Nemea is really not that much different from the more famous Olympia. Had history wanted it a little differently, we had talked about the Nemead and the Nemean Games. Because also Nemea organized sporting events in ancient times, with up to 40,000 spectators and participants who won wreaths of wild celery, instead of the ones made of olive branches in Olympia.

But the story begins long before that. The Nemean valley was inhabited in the Bronze Age, and the myth says that Zeus' son, the hero Heracles, fought a monster called the Nemean lion and won - the first of twelve labors the great hero was forced to perform. (Labor no. 2 was against the Hydra from Lerna.) It was also here the little prince Opheltes was killed while lying on a bed of wild celery, and it was in his honor that the games originated.

The first Nemean Games was held in the year 573 BC, and as well as Olympia, both Delphi and Isthmia of Corinth arranged games at this time in history. The temple that stood here then is gone, but a new temple was erected in honor of Zeus around 330 BC, and a part of the Doric colonnade of this temple dominates the site today (main picture). We can also see the remains of the bathhouse (picture left), homes and eateries, to name a few. At this time, Nemea was not inhabited, so it was quite a bit of an apparatus that had to work when thousands of Greeks came from near and far.

We can barely glimpse the remains of an older stadium close to the temple, but around 320 BC, Nemea got a new stadium, about 400 meters from the temple (picture left). Some pillars at the entrance show the location of the locker room. Here sportsmen removed their clothes and oiled their bodies, before they took part in the Games, still naked. They entered the stadium through a 36 meter long tunnel. The tunnel is still in good condition, and one of the earliest examples of vaulted structures in Greece. Look at the walls, and you will find some of the participants' names written there, carved while they were waiting to enter the stadium. Ancient graffiti, in other words.

The museum is worth a visit, not at least in order to study the three models of Nemea, from three different eras. Moreover, you can admire the artifacts found in the area, both from the Nemeic Games’ and prehistoric days.

Next to the temple area is the village Archea Nemea, and if you drive northwest a few kilometers, you’ll come to the municipal capital, Nemea. None of these towns are the least spectacular, but the road between them winds through a lovely landscape, and you can also drop by Moni Vrachou, Monastery of the virgin of the rock. It is built on and in the steep, bare side of Polyfengo Mountain (photo right). The monastery was completed in 1631, and is almost perfectly camouflaged. But look closely when you come from the south towards Nemea, and you will find it.

In Nemea you can eat a good lunch and maybe buy some wine.

Because the Nemean Valley is in fact also famous for its wine. The unique, Greek Agiorgitiko grapes are grown here, and they give velvety, deep red wines with lots of flavor. You will see signs with "Wine Route" displayed on them, they lead you through vineyards, past the wineries which sell wine to the whole world, or (let’s say) Mrs. Eleni in a simple shed who sells her homemade version in plastic bottles. Try both; Mrs. Eleni may certainly know a trick or two about winemaking!

Forget the Olympics, here's the Nemeics 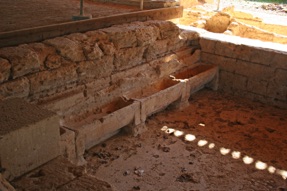 site should be, go to Ancient Nemea. 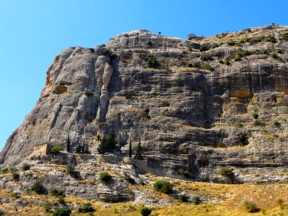 Do you want to participate in the Nemean games? The modern Nemead is arranged every fourth year, and you don't have to be an athlete. More info: nemeangames.org.