Patra (or Patras) is the largest city in the Peloponnese, but far from one of the prettiest. This is a busy port city, with ferries to Italy and other countries, two universities and hectic traffic. The city was European Capital of Culture in 2006, but is probably best known for its carnival celebration, which is one of the largest in Europe. The celebration begins February 17. and lasts until "Kathari Deftera", Clean Monday, which is the Monday seven weeks before Orthodox Easter Sunday.

There have been people in the Patra area since at least the third millennium before our time, and the town flourished in Mycenaean times. As part of the Roman Empire it became a major port, and during the centuries it got an equally colourful history as the rest of the Peloponnese – controlled by many mighty empires - until it became part of Greece in 1828. Patra was, by the way, also the first city in Greece who had trams and electric streetlights.

The city is geographically divided in two, and the upper part is nicer than the lower, and also the oldest. Here you can visit a Roman Odeon, which is restored and still in use, and a park inside the walls of a Venetian castle.

Also worth visiting is the Archaeological Museum, in a great, modern building (completed 2009). The museum is the second largest in Greece, and has many great exhibitions of artefacts from the area. It is located just outside the city centre, on the road to Rio and Athens.

And then we were in Rio, which as far as we know, don’t have anything with the aforementioned carnival to do, in spite of the name. The most fascinating regarding Rio is, in our opinion, the contrasts between old and new, which is so overwhelming: An old castle and a modern bridge, side by side. The castle was build by the Turks in 1499, and it has a brother on the other side of the gulf, in Antirio. The Castle of Rio is well preserved, and very nice to explore.

The majestic Rio - Antirio Bridge, completed in 2004 and named Charilaos Trikoupis after the prime minister who first proposed it in 1889, is engineering at its best. Among other things, many small (and occasionally larger) earthquakes rattles the area, so the bridge must tolerate that the land it is attached to keeps moving.

The bridge, which is almost 3 km long and the longest of its kind in Europe, is linking the Peloponnese with the mainland.

Finally, we must mention the Achaia Clauss winery, named after the county we are in (Achaia), and a Bavarian wine lover named Gustav Clauss, who was fond not only of his wine, but also Greece. He founded this winery during a trip to Greece in 1854. Join a guided tour, and sample his famous Mavrodafni, Greece's answer to port (to put it a bit simple). The beautiful vineyard is in Messatida, just south of Patra. 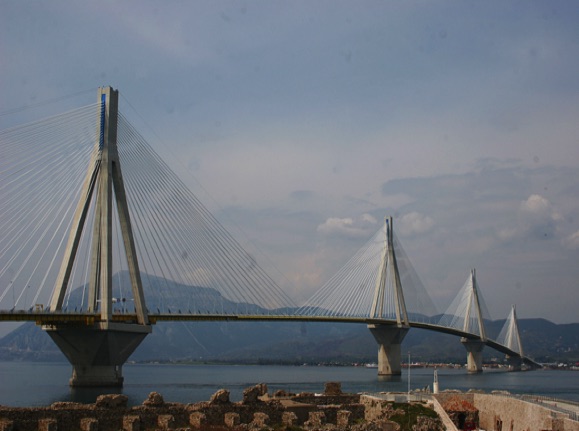 Carnival, a castle and a bridge

184 km from Nafplio, while Rio

is about 7 km closer.

The bridge (above), Patra (below).

The castle in Rio and the bridge. 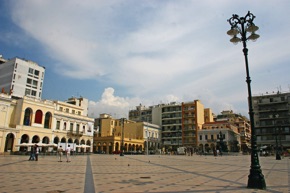 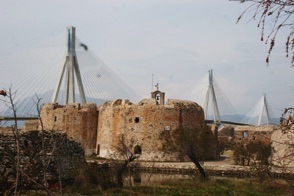 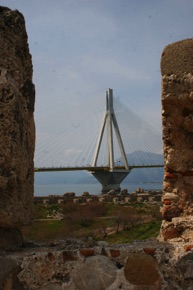