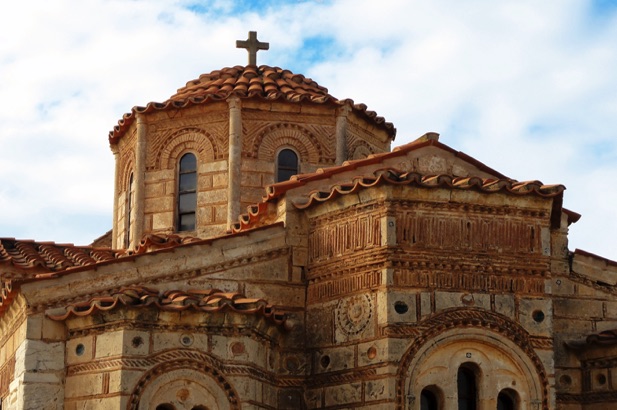 Merbaka is the local’s name for this village east of Argos, but the official name is Agia Trias or Agia Triada, the "holy trinity". This name was born due to a pediment, which is part of a church wall and depicts three figures. The pediment was made in Classical times, that is, long before Christianity's Holy Trinity.

Well. Let’s not jump ahead of ourselves. Agia Triada's "claim to fame" is this beautiful, relatively large and still very impressive Byzantine-Gothic church, dedicated to the Virgin Mary's Assumption. (Kimiseos Theotokou). The church is probably build at the end of the 1100s or maybe the beginning of the 1200s. The facade is adorned with brick ornaments, and inside, we find lovely, Byzantine wall paintings (if we get inside, the church is, unfortunately, often closed).

It was not uncommon for the earlier church builders to use building materials from older temples. That people worshiped Zeus and the other gods of Olympus in the temples, apparently played no role, and whether this tells a tale of pragmatism or a generous view of religion, it's always exciting to look at the old church walls and see if you can discover building blocks from temples.

Merbaka or Agia Triada’s church has, as mentioned, this pediment (pictured right), three robe-clad figures, of which the centre one appears to be a woman, at least in my opinion. And these three, as earlier said, have given the city name. The Merbaka name, by the way, probably dates back to an archbishop and philhellene, William of Moerbeke from Flanders, who served in Corinth in the 1200s.

The church in Agia Triada, I guess, is not alone worth an excursion, but it is close to other destinations such as Argos, Ireon and Midea, and is worth visiting when you are in the area.

A Byzantine church, a Classical pediment 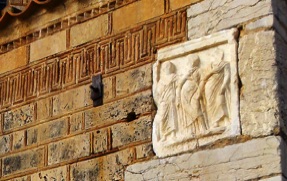 The holy trinity from the days of Zeus.