The trip to Alea / Tegea takes us through a beautiful, partly barren and desolate mountainous terrain, before we arrive at a large, fertile plain, filled with fruit trees, nut trees and vines between the small villages. Alea is perhaps the most beautiful of these, and offers interesting sights such as the Athena temple, several old churches and Tegea, a city that was inhabited 2600 years ago and onwards.

First, directions: From Nafplio we drive south along the west side of the Argolic gulf, and close to Kiveri we take off towards Tripoli. Soon we’re in Arcadia county, and climb upwards in an increasingly barren landscape. When the road flattens villages pop up, surrounded by trees and green fields. At the village Stadiou we turn to the west, and after a kilometre or two we’re in Alea / Tegea. The signposting is not perfect here, so you may need to ask for directions, but the distances are short.

Alea is, as said before, a really pretty village, with lovely houses built of stone. If you want to attend the village festival, be here July 20., when Saint Elias is celebrated by locals and hundreds of expatriate Aleates.

In the middle of town is a temple called Alea Athena. A famous sculptor and  architect from the island of Paros designed it, and it was erected in 340 BC on the remains of an older temple. Athena Alea was the second largest temple in the Peloponnese, 48 x 19 meters. A statue of the goddess Athena, made of ivory, stood here, but the Emperor Augustus, swiped it and brought it to Rome.

The area is closed off, but you should in theory be able to enter by contacting the Archaeological Museum located nearby - which is also closed ... (2010) (Rumors says the museum is now reopened - 2015.)

Norwegian archaeologists have worked with excavations here, but have now moved a short distance to the north. From the temple area, follow signs to the Folk Art Museum, and you’ll find the excavation area Tegea. Tegea was also the ancient name of Alea, so we still move in the same town. Tegea is the current name of the municipality.

Ancient Tegea was a very important city in the Peloponnese, and the most important in Arcadia. Perhaps 20,000 people once lived here, but only a small area is examined. Temples, theatre, agora (market) and a stadium were located in Tegea, and the inhabitants had great political and military power. As far as one can see at the excavation area, people have stayed here from 550 BC to the year 1200. The Norwegian archaeologists are here in June / July, the other times of year the site is covered.

Read more, from The Norwegian Institute in Athens.

However, there are good reasons to also come here other times of the year. We have mentioned the Folk Art Museum, but also the beautiful park here is worth a visit. It offers both a tavern and a playground, not to mention a Byzantine church, Pali Episkopi, although admittedly the upper part of the building is from around 1880. The church rises on top of the remains of an ancient theatre, built around 175 BC. A patchwork of history, in other words!

You could travel further north to Tripoli, the capital of Arcadia county, or westward to the coast and Paralio Astros. 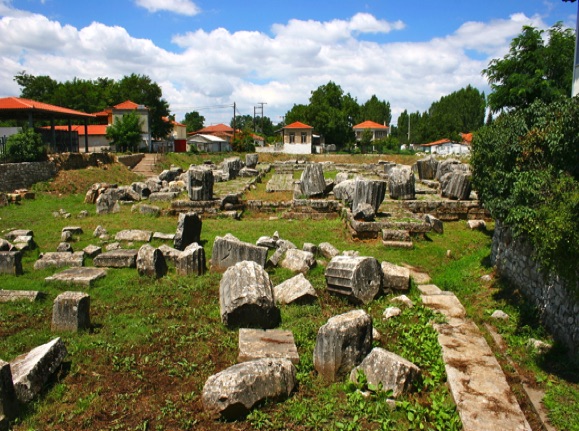 Athena's temple and an ancient city

Alea is located in the county of Arcadia, 54 km from Nafplio.

Arcadia (utopian) refers to a vision of pastoralism and harmony with nature. The term is derived from the Greek province of the same name which dates to antiquity; the province's mountainous topography and sparse population of pastoralists later caused the word Arcadia to develop into a poetic byword for an idyllic vision of unspoiled wilderness. Arcadia is associated with bountiful natural splendor, harmony, and is often inhabited by shepherds. (Wikipedia) 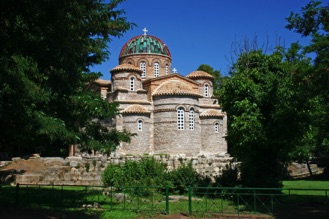 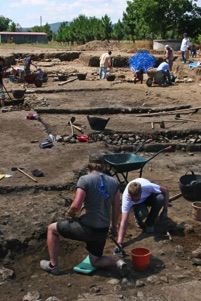 Pali Episkopi (over) and the Tegea  excavations (right).