Tripoli, the capital of Arcadia county,  is not the city you go to because it’s so immensely beautiful, or because of all the sights. Because Tripoli is a busy, modern city, and it doesn’t offer so many sights as most of the other cities we write about here.

But Tripoli is the hub of the Peloponnese, almost in the middle of the peninsula, and if you are in or close to Tripoli, it’s not such a silly idea to stop here: The city definitely has nice things to offer.

During the independence war in the 1820s, Tripoli was totally destroyed, and what we see today is a mixture of (many partially decayed but once beautiful) neoclassical buildings and newer office buildings and blocks of flats. The city has about 25,000 inhabitants and is located about 650 meters above sea level. Winters can be cold and wet and summers are slightly cooler than down on the coast – the latter could be an advantage.

Maybe the finest spot in Tripoli is Filodendron Park (pic. right), not named after the plant of the same name, filodendron is Greek for "friend of the trees." The park is beautifully laid out, a peaceful green lung in an otherwise car filled centre. A few cafes and tavernas tempt you to stay for a long time.

Also on Platia Aeros, next to the park, the cafes are in abundance. This is said to be one of the largest platias (squares) in Greece and the Balkans, and is now undergoing rehabilitation. On the square proudly stands a statue of the commander and war hero Kolokotronis, and his bones are in the base of the statue. At the end of the square lies the courthouse, designed by Ernst Ziller (1837 - 1923) a Saxon architect who later became a Greek national.

Continue a few blocks further southeast, and you’ll get to Platia Vasilliou with its Ag. Vasilliou Church - the only church we know of that has shops in the basement (main picture)! The church is built of marble, and had it not been for all the cars in the roundabout below, the church and the square had been a real gem.

A few minutes walk southeast, to Evangelistra-street, and you’ll end up at the beautiful Archaeological Museum, also designed by Ziller, originally as a hospital (pic. left). The museum has fine collections from around the Arcadia County, from the Neolithic and Mycenaean era to the early Byzantine period. (Open 8:30 - 15).

By the way, Tripoli’s name means "three cities", the three cities it refers to are the ancient cities Pallantion, Tegea and Mantinea. 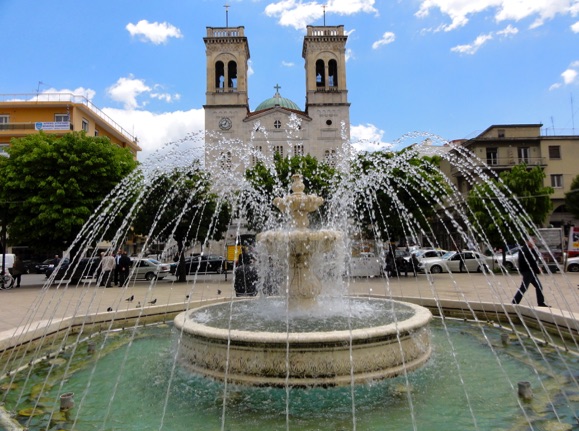 A busy and bustling city in the centre

Tripoli is located in the county of Arcadia, ca 65 km from Nafplio. There are two buses/day between the cities.

The Ag. Vassilliou Church (above),

The Malliaropoulio theatre in a building dating from 1910, on Platia Petrino. 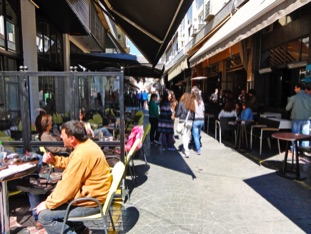 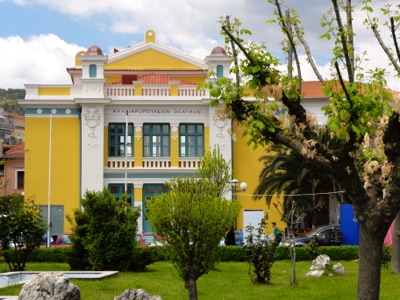 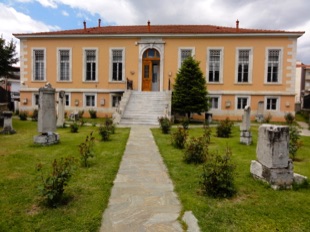 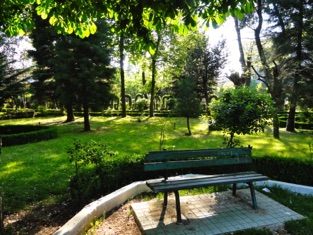 The Archaeological Museum (below).