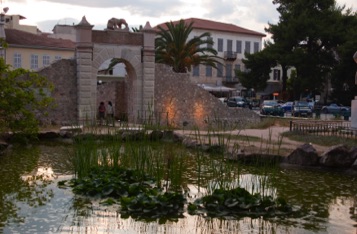 VOULEFTIKON, or Parliament, is the big, gray stone building pictured above, off Syntagma Square to the south. The Turks built it in 1730 as a mosque, but later it housed the first Greek People's Assembly, which met here for the first time in 1825. Right behind Vouleftikon is MEDRESE, a building that used to be a Turkish religious school in connection with the mosque.

The buildings were later used for, among other things, prison, but especially Vouleftikon is now carefully restored to its former glory. Vouleftikon is not usually open to the public, but once in a while you can catch a concert in the great hall, worth experiencing not only for the music!

Behind Vouleftikon and Medrese, in Konstandinopouleos Street, we find a beautiful VENETIAN BUILDING. This house has probably been the Venetian headquarters. When the Turks ruled after 1715, the house served as residence for the Aga Pasha, and it is also believed that the newly appointed Greek government resided here in 1824 and -25.

THE ARCHAEOLOGICAL MUSEUM at Syntagma was, as earlier mentioned, a Venetian arsenal from 1713. It’s one of the most impressive Venetian buildings existing in Nafplio, build in a kind of baroque style. The building has also been living quarters for soldiers, and was used by the Germans during World War II as their interrogation center. A very military career, in other words, reflecting in the building’s strict shape.

NAFPLIO PUBLIC LIBRARY, "O Palamidis" is worth a look. The neo-classical house is from 1887 and was originally a girl school. In 1951 the library was founded by the progressive union "O Palamidis", working for enlightenment in Nafplio. The library has over 70,000 books, letters and newspapers, some of them from before 1551, as well as historical paintings on the walls. You’ll find the library in the end of Amelia’s street, just pop in and take a look!

THE ARMANSBERG’S RESIDENCE (under), near the top of Syngrou Street, is one of the most important and beautiful buildings from the time of the Greek independence. The house is Venetian, but was significantly rebuilt in 1831. Here the Bavarian Count Ludwig Joseph von Armansberg lived in 1833 and -34. He was prime minister in the new government, and decorated his home with the finest interiors, and arranged balls and grand receptions.

The neoclassical COURTHOUSE, across the street from the Armansberg's residence, was completed in 1911. If it’s open, take a peek into the hall with the imposing staircase, where the marble steps are worn down by all the feet that have trodden here.

Also see The Three Admirals' Square for other historic buildings. 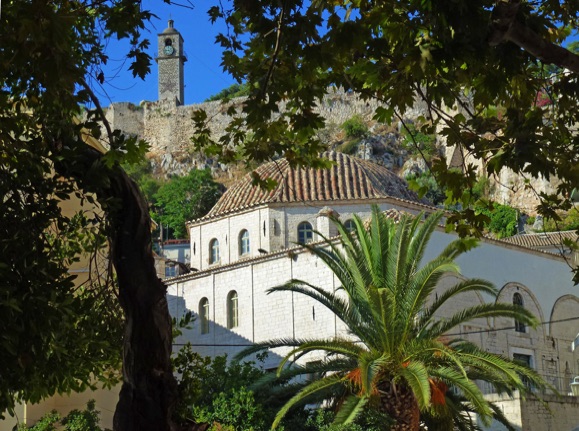 A parliament, a recidence and a mosque

Armansberg’s residence looms to the right behind the LAND GATE, built 1708. But there was also a gate here before this, in fact this was the only entrance to the city by land. It was closed by sunset, if you came to late you had to spend the night outside. 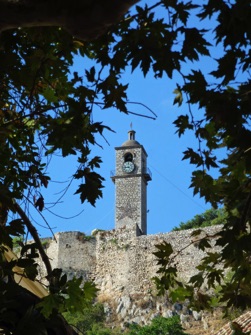 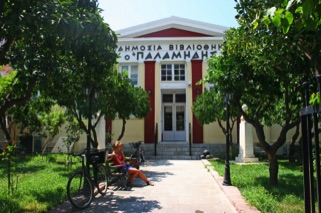 Originally, a part of Acronafplia called Castle of the Greeks, stood here.

The first Clock Tower was built during King Otto's reign, bombed by the Germans in 1944, and raised again in 1949. It',s the perfect place to be to take bird's eye view photos of the old town. 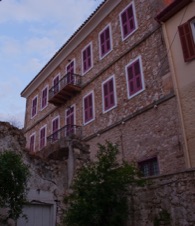