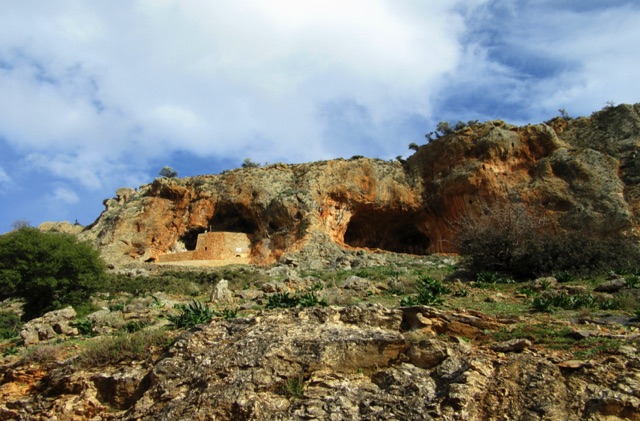 We asked people in Nafplio if they knew anything about Zogka. They did not, they had not even heard of this place. The result had probably been better if we had asked a priest, for in Zogka is Ag. Ignatius situated, a centre the Argolic clergy recently built to arrange clerical conferences, with churches, meeting facilities, lodgings and the like.

But we're not going to Ag. Ignatius, we are going to visit two cave churches located near Zogka or, if you can't be bothered to walk about three quarters of an hour uphill, at least one. The first church is Agia Paraskevi. Drive towards Zoga, and as you approach this village you'll see a sign in Greek (see pic. to the right). You can park at the sign or drive up the 500 meters to this church.

We, and others, know little about the history of the church. But take a look at the mountain side by the church, and you see small holes in the rock wall. There's a large cave behind these, or perhaps only a system of tiny caves behind the church, no one knows, because no one has found the entrance. In this cave(s) the Greek liberation fighters hid, and killed Turkish soldiers that besieged Greece in the early 1800s. Large groups of Turkish soldiers, on their way in the narrow ravine, was easy prey for the liberation heroes, who made use of nature's own loopholes. Some locals believe even war hero himself, Kolokotronis, led the battle, others are not quite so sure about that. Anyway, the Greeks won the battle at the end.

Agia Paraskevi is a cave church, with a rather modern wall covering in front of the cave. Inside you can see icons, and maybe feel the enchanting mix of piety, kitsch and pragmatism that characterizes this type of churches. A plant's green leaves has forced their way through the rocks, and maybe you can smell the scent of incense.

When you stand at Agia Paraskevi, notice the footpath that winds its way up the mountain. This leads you up to Agios Nikolaos. It is a smooth, fine dirtroad, one and a half kilometers, and you are rewarded with great views. Agios Nikolaos looks like a fort, and the impregnable fortress wall is just that: you will not be able  to go into the cave church. The reason is that the church was stripped of many valuable icons, and only a "fortress" could keep the thieves out. But the walk up here is nice anyway, especially if you have brought some food and drink, and sit down outside overlooking the majestic mountains.

Agios Nikolaos has a long history, when it all started nobody knows, but there has been a church here for centuries and residence for hermit monks. At the time when Greece was occupied by the Turks for the second time, Ali Pasha stayed here. It's said that he lived in the cave church and had big, fat pigs in the cave next door. Afterwards, the monks took over the place again. The curved "fortress wall" is of relatively recent date.

When you're down on the main road again, proceed happily into Zogka. Just a little handful of people live here, but the views they have, it's worth millions!

Heading to Zogka, add also stop by Kefalari and Elliniko.

Cave churches in a mountainous landscape 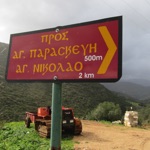 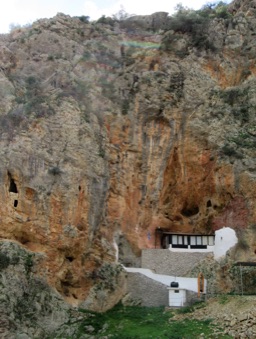 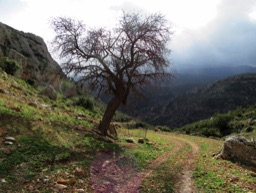 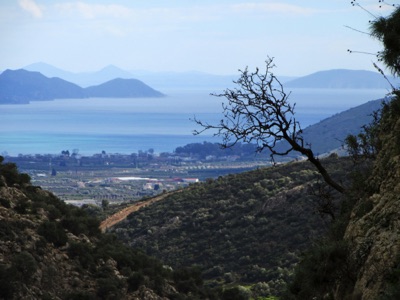 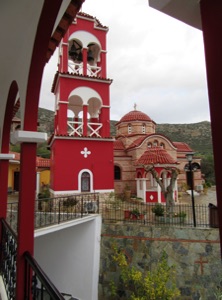 Agios Nikolaos, the cave church and the pig stie.

Agia Paraskevi and the "loopholes".

The path up to Agios Nikolaos.

Zogka,with a view towards Nafplio.