Doing a little detour on the road between Epidavros and Nafplio, just before arriving in Arkadiko, you'll see the exit to several Mycenaean treasures, including an old Mycenaean stone bridge, from the years 1300 - 1200 BC. Kazarma or Arkadiko Bridge is so well built that it can still be used. This is in fact the world's oldest bridge, not in the sense that it is the first to ever be built, but the oldest surviving! The bridge is 22 m long and 4 meters high and built of huge, so-called cyclopean stones.

The bridge was part of a road system that ran between two cities in Mycenaean times, and there are a couple more bridges like this in the area. One km to the west, Petrogefiri is spanning the same river, and the path you see at the left of the photo above leads you to yet another bridge, 2.5 km away. The trail can be difficult to follow in after a while, but we can email you an accurate description for it to be easier.

The bridges are signposted at the main road between Nafplio and Epidavros, but while the Arkadiko Bridge is located just off the road, easily seen if you follow the brown sign saying Archaeological Site, the others need small detours by foot. following the road, just after you reach the bridge, you can also see the remains of a Tholos-(beehive-) burial chamber, and the sign to the road that leads you up to Kazarma (pic. right), the ruins of a small acropolis on top of a 280 meter high mountain.

It is a nice, short walk up to the castle, and you will probably be the only one there, except perhaps for a few goats. Mycenaeans were the first to built fortifications here. Large parts of the walls you see today dates from the fourth century BC, but both Venetians and Turks have had camps here. The Greek name Kazarma is originally the Italian Casa di Arma, "military barracks". The castle lay on the border between the two ancient city-states Argos and Epidaurus, and originally had four towers.

This is now such a tranquil little spot, with beautiful views, including the Palamidi in Nafplio, the sugar top mountain of Asini and lush farmland almost as far as the eye can reach. 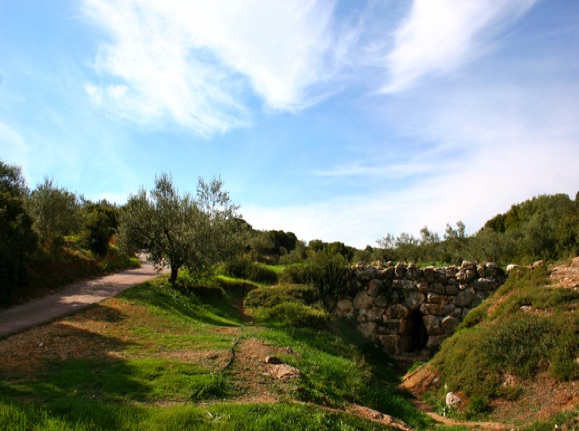 The oldest bridge in the world, an old castle 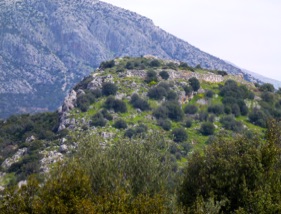 The sights of Kazarma used to be located along the former main road between Nafplio and Epidavros / east coast of Argolis. Now there's a new road between these places, so there's probably needs for directions.

Drive on the main road towards Epidavros. About 13 km from Nafplio there's an exit, signposted both with "brown attraction signs" and Arkadiko. Follow these signs, and after a bit you'll see a sign with Mycenaean Bridge A, (don't bother), and soon you'll come to the bridge on the main picture, the bridge of Kazarma, also called Mycenaean Bridge B. Continue eastwards for a short kilometre, and you'll see signs to the Kazarma Acropolis and to Arachneo. Turn left there and drive 260 meters. You'll see a dirt road that goes uphill to your left. Park your car and walk upwards. This dirt road ends in a small plain. Walk straight over it, stick to the left. A narrow, almost invisible, path leads you up to the castle, that you will see if you look up and to your right. It's not far and not difficult. Soon you'll see the wall in the image below. Walk around the little tower (far left in the picture), then up along the castle wall and you're inside the castle. 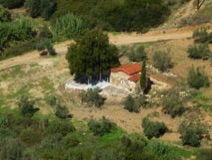 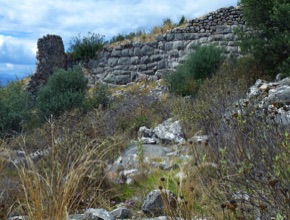 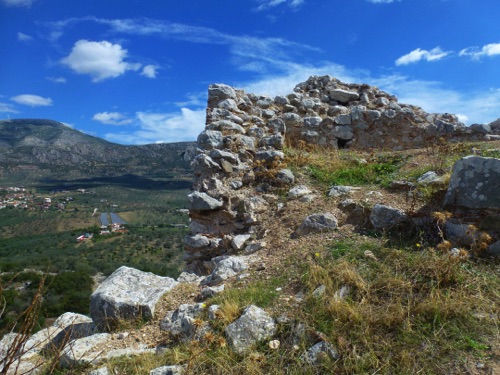 seen from the Kazarma Acropolis.